Ever wondered what it would be like to make an art exhibit? Or build your own museum? Welcome to my semester thus far.
The collection project’s guidelines say that we are to pick at least 6 works of art, and build a maquette as if we are building a space specifically for an exhibition that we will be presenting to the community at the end of the semester. This is to teach us the ins and outs of everything that goes into a curator/collector making an exhibit. This means we will do everything from writing fake letters to artists to planning an event for said artist to appear at. It should be very fun, since this is an opportunity for me to engineer some creative architecture. 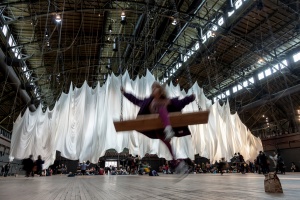 ‘The Event of a Thread’ by Ann Hamilton

My idea that I presented in class, since we had a designated class time to receive feedback, is to host an exhibition entirely on Interactive Art. Interactive Art is any piece that needs/allows the viewer to participate in order to ‘complete’ the artwork.
I chose this subject because of an ART21 I saw on Ann Hamilton’s ‘The Event of a Thread’, which is going to be the show runner of this exhibition it seems. It has really attracted me ever since I saw this ART21 video on it over the summer. There’s something about that surreal sensory stimulation that I love. I can’t imagine how huge that white sheet is in person. Which is why I want it in my show. In fact, this work pushed me into the world of interactive art and I definitely see it becoming a  special interest come my senior year.

So I have at least one ‘set-in-stone’ artwork, but I need 5 more. I can’t say that I have a theme in mind, but I knew I wanted interactive art. So I looked up some works and here is the preliminary list. 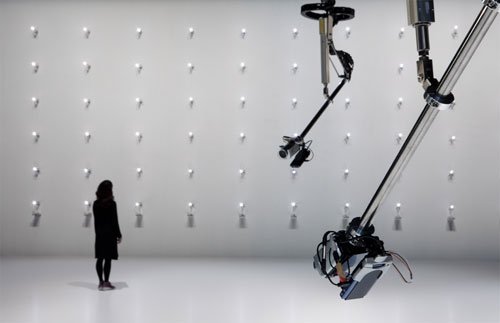 ‘Desire of Codes’ by Seiko Mikami Image courtesy of flikr

This is titled Desire of Codes by Seiko Mikami. She thrives in digital interactive art which may become my specialty. The viewer walks into a room with walls covered in cameras that watch them, making the viewer uncomfortable. 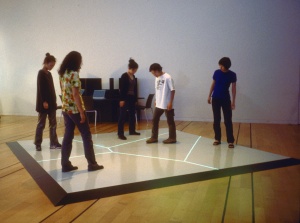 Scott Snibbe’s Boundary Function is another digital interactive art. It is a toush/motion sensitive foor panel that projects lines seperating participants who step on it. The more people on the panel, the more lines appear, essentially sectioning off each person. In theory, many people could fill up the space untill there is no more room. It is meant to illustrate how personal space is only relevant to the person closest to you.

I don’t know if you can sense a theme, but I am leaning towards the idea of ‘Comfort’. On Tuesday, I was able to present my idea to the class, and was given valuable feedback. While presenting, I realized that I wanted Ann Hamilton’s work to be the last thing a visitor saw before they left. This then led to the thought of making interative art that makes the visitor uncomfortable, then ending it with The Event of a Thread to mellow them out. Sort of like ice cream after a doctor’s visit. One of my classmates then gave me the idea of calling it ‘FunHouse’ since those are sort of meant to be jovial but always make people uncomfortable. My professor suggested I look up interactive art of the 1960s. Also the names Dan Graham, Robert Morris and Vito Acconci. I have to say these artists are very substantial in their work.  Although, I was hoping to have more female artists to come up.

In conclusion, I am very excited with the work I have ahead of me. I also found this great video on installing art and art preservation.