Thursday was the opening of the show, with a one hour discussion with the professors during the community hour. We actually had a great turn-out for the show.  I have to say, it was stressful until the last minute. My team and I were still turning off lights that were not supposed to be on during the show. We’re seasoned.

I also had a kind of premonition that I should check our studio the day before the opening and walked in on our lights being changed around. Not out of malice, but because one of the lights we had was blown out, it made the rest of the room seem as though all of the lights were not set up properly. Not to mention, the DVD players were not on look, per say.

It seemed a bit haphazard until we were actually done with it, honestly. I’m very proud of my team and how we adapted to every little hiccup. Originally, the room was supposed to have a curtain draping over the gate in the back. But that fell through. We also intended to have a triangle bookcase instead of a square one, with maybe 20 books. Needless to say, the square ended up being a blessing because we found over 60 books and DVDs and the presence of the bookcase fills the space so much better.

Teh TVs were a huge change as well. Originally, we were going to feature four tv sets in the center of the room, having them facing out. After a quick discussion with Leah (aka Gallery Manager Extraordinaire), she let us know about the liability of having the cords from each TV extending from out of the center of the room to the side. After that, we decided to put the TVs in a design on the wall. This allowed us to also play with the placements of the cords. Leah was also kind enough to go get us extra DVD players, screws, extension cords and everything else we could wish for.

In the end, I would consider us successful with the time we had. On the right side of the room, we kept it clean and “statuesque” with Julia’s portrait of will smith facing a poster of Six degrees of Separation, and a portrait of Tolliver  which faces Will Smith. On the tiny wall accompanying them, we placed a Henry James quote(a writer/scholar whom Tollliver admires) written in Tolliver’s handwriting and his picture above that. On the other small wall, we wrote again in his handwriting, a quote from Tolliver himself. On the longer wall ont he left, we placed the TVs that all displayed on mute movies that can be found in Dr.Tolliver’s classes or in his personal collection. On the center TV, we played with sound his lecture on black male representation and also mentions Six Degrees of Separation. On the right of the tvs are Agnes Scott produced “Slave Narratives” that are actually advertising classes/lectures Dr.Tolliver has given. On the left is a Glen Ligon print and a “Black Male” T-shirt. The Bookcase features 69 books/dvds in total all dealing with black feminism, black images in media, black masculinity, Henry James, Nella Larsen, and sexuality, race, and gender.

All in all, the exhibition was pretty successful. As was the opening. There was only a snafu in the printing of the booklets, but otherwise the discussion was great. Oh, and as a bonus, my work that I did of Dr.Newsome surrounded by black female feminists was featured on the advertisements of the show. (see below) 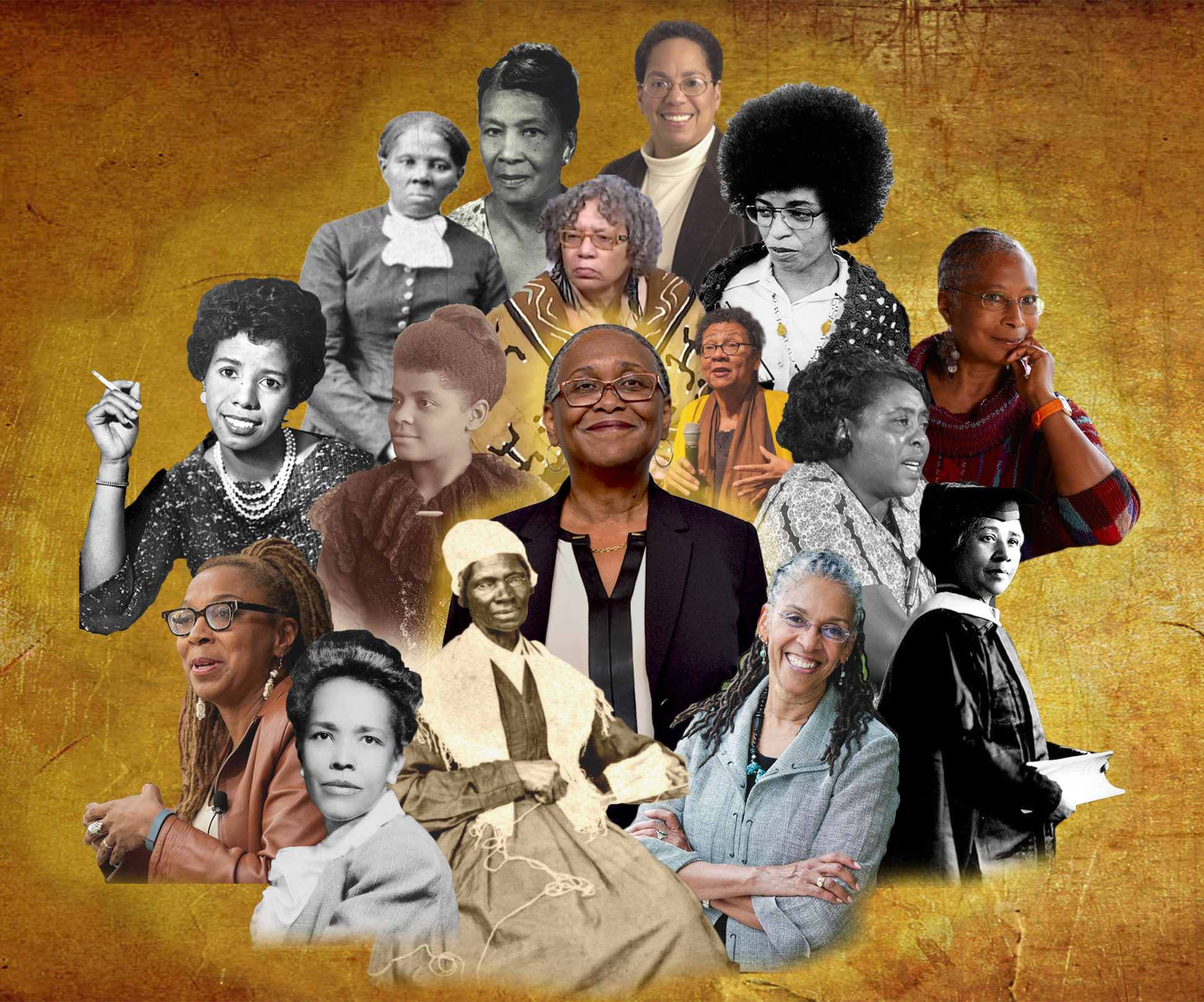 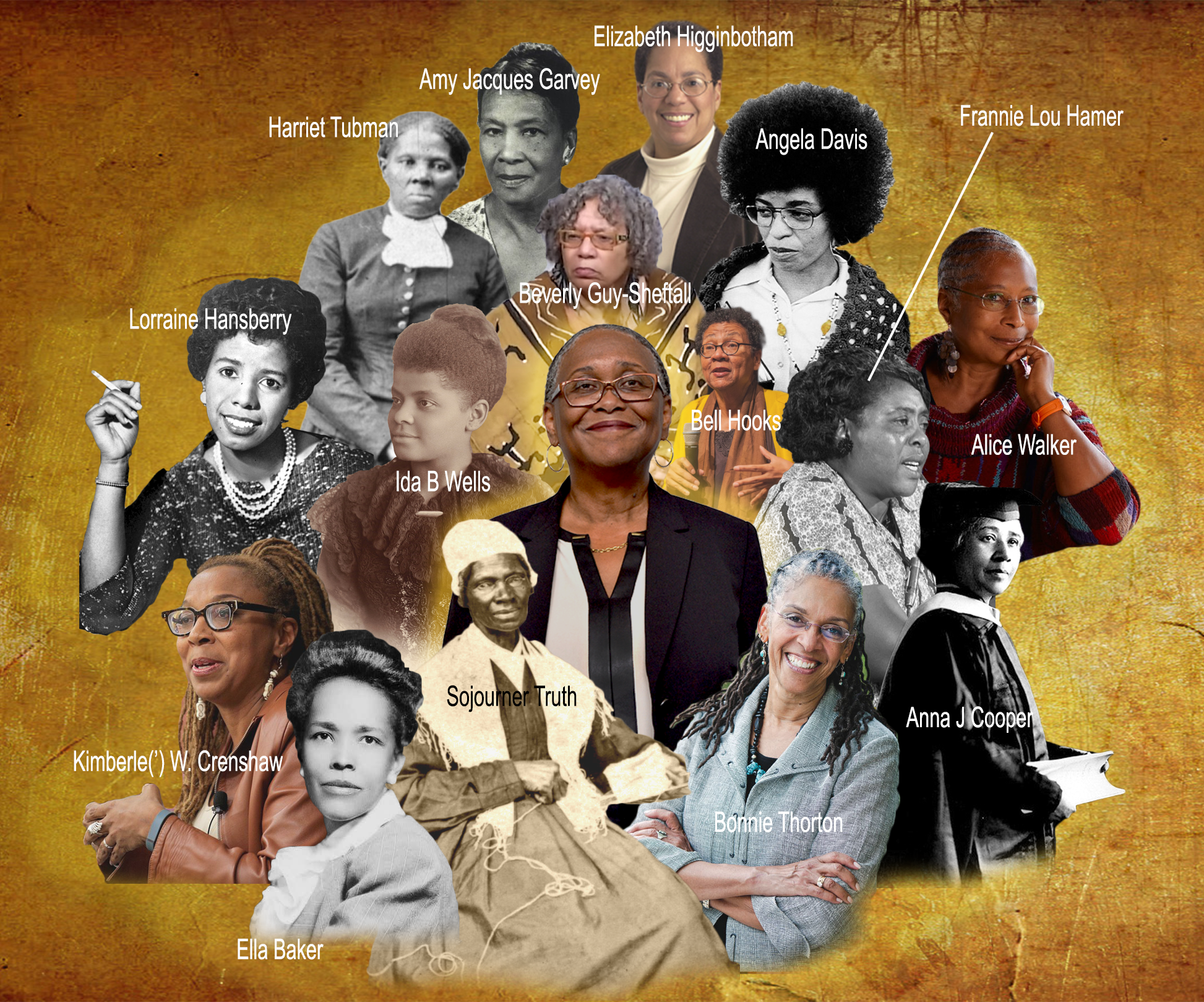