For our final reflection in this class, I’m choosing to go back and write about my favorite project: The Blind Contour on Screen. It’s my favorite not because it has pretty colors, but I found it easy and instinctual in arrangement and color.

Originally, this assignment was to just practice the eye in paying attention to detail and the form of objects. This started with the hand-contours (which you can see a cut stop motion video I did on transforming it here and a post here). This time, we practiced with wacom tablets. Now, I’ve already done a post on the assignment and it’s process here, but this post is all about the design.

Firstly, the unintentional. I actually was impressed with how much of  a character this is of me. Now I don’t think that you could pic this image out of a line-up and say it is me. But, certain features do stand out like the glasses and nose. I think the thickness of line lends itself to this as well; I changed them randomly just to add variation, not necessarily knowing that I would ‘merge’ three contours together. Good thing I kept relatively thin lines, the recognizable forms wouldn’t be as strong with thicker lines. 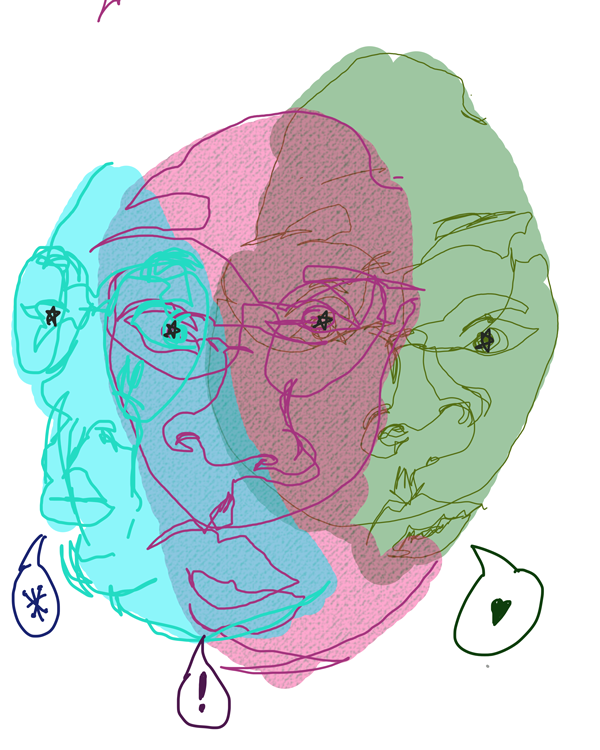 Self Portrait in 3 by yours truly

It also would have probably added a more childlike look to it. I’m really pleased with how the thin lines make it more sophisticated and deliberate. The misplacement of the eye and lack of realism seems more trained. (and I’m a sucker for looking more trained. )

Now about this texture, which was more deliberate. Originally, I thought of making all colors opaque, as if I cut it out and pasted it together and drew the lines on top. But as I matched up the contours, I found balance in the eyes. So, naturally, I overlapped them, slowly rotating until they made a semi-horizontal line. This made me think about how the interaction between the lines on the sides of the glasses make a weird intricate nest that made this whole thing seem so deliberately messy. Following that line of thinking, the colors became less opaque.

This caused me to think more about the edges of each color as well–making the blue more clean and angular, while letting the pink become more of a blob and adding a textured filter. The more subtle variation I added, the more the image became a hazy mess, and subsequently the more I loved it. I chose to keep the lines opaque to  create the suggestion of containment rather than let everything feel loose. I find the contrast between the clear blobs of color and crisp jagged lines made this feel impactful and full of emotion.

Overall, I am really proud of this work. Unintentionally, it felt like I was displaying three sides to myself as each blind contour is actually a different angle of my face. I might even make this into a painting somehow/someway!

Has one comment to “Image Process: Form and Meaning”